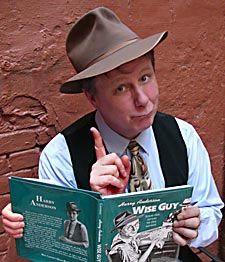 When it comes to talent Harry Anderson is a triple-threat excelling in acting, comedy, and magic. In this article, we explore Harry’s life and how he grew from a magician to a comedian. He eventually moved on to become a television and film star. Read this post to discover how Harry’s interest in magic transformed his life.

Harry was born on October 14th, 1952 in Newport, Rhode Island. His given name was Harry Laverne Anderson. As a child, Harry would hang around card sharks at the Ambassador Hotel in Chicago. Old men would gather in a room called the pump room to play cards. One of them sat Harry down and taught him the Three-Card Monte. This was Harry’s first exposure to magic.

Intrigued by the ability to earn easy money Harry soon took to the streets of Chicago as a con-man performing the shell game and other hustles. Unfortunately, a not so pleased spectator punched Harry, breaking his jaw. After that Harry decided to incorporate his hustles into a routine as a street performer. He didn’t make as much money this way, but he could maintain his physical well-being.

As a teenager, Harry performed his magic act on the streets of Chicago, New York, St. Louis, and New Orleans. At age 16, he moved to Los Angeles, California. A year after his move he joined the Dante Magic Club and began performing his act in San Francisco. In 1970, Harry graduated from North Hollywood High School as Valedictorian.

After completing high school Harry moved to Ashland, Oregon where he continued to perform magic and also worked with the Oregon Shakespeare Festival.

Harry Anderson’s first big break came when he had returned to Los Angeles with his wife to visit her parents. He was performing his act at the Magic Castle when Kenny Rogers’ manager, Ken Kragen, saw him. Kenny Rogers’ song “The Gambler” was a hit at the time. Kragen thought Harry’s material was a good fit as an opener for Rodgers and asked him to come to Las Vegas. Harry agreed and went to Las Vegas to perform.

It was while performing in Las Vegas that Harry was asked to appear on “Saturday Night Live”. He agreed and ended up appearing on the show nine times in the following years. Soon Glen and Les Charles approached Harry about appearing as a con-man on the show “Cheers”. Harry received his biggest role as Judge Harry Stone on the sitcom “Night Court” as a result of his appearances on “Cheers”.

That is how Harry Anderson went from being a street magician to a television star without ever having taken an acting lesson.

Harry continued his interest in magic throughout his life. He toured extensively performing his act in comedy bars and on broadcast television. He also wrote a book called Games You Can’t Lose: A Guide for Suckers. In the book, Harry teaches tricks, cons, and scams. He also appeared with Criss Angel on a television special called The Science of Magic in 1997.

In 2006, Harry and his wife Elizabeth Morgan sold Oswald’s Speakeasy and moved to Asheville, North Carolina. Harry continued to appear on TV and in Film. His final appearance was in the 2014 Christian drama film A Matter of Faith.

On April 16th, 2018 Harry Anderson died in his sleep. He had contracted influenza and subsequently suffered a number of strokes before his death. He was only 65 years old.

Harry Anderson’s lifetime contributions to the world of magic were enormous. He inspired many other magicians with his unique combination of comedy and magic.

If you enjoyed this article please check out the Institute of Magic Blog to learn about other magicians. Also, visit our online magic shop for the latest tricks.